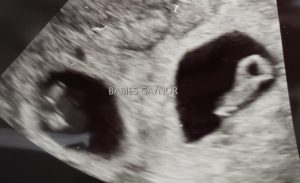 You read that right, twins again! Don’t worry, this isn’t only our second time–it’s our fourth!

These babies will be #7 and #8. I’ve never known anything but twins, so this is normal for me. Even so, I find twins again daunting. I know exactly what to expect!

All of my twins are from IVF frozen embryo transfers of two embryos. This was my fifth frozen embryo transfer after my fourth transfer ended in miscarriage of a singleton (one baby). I guess I’m not supposed to have one baby at a time. All of my twins are fraternal, meaning they originate from separate eggs and have separate placentas and sacs. They’re the lowest risk type of twins.

In addition to that, I’ve had remarkably unremarkable pregnancies. All babies were evicted around 38 weeks, 5 days by induction or c-section, all babies weighed above the 5 pound, 8 ounce cutoff for low birth weight, and I have had no complications during pregnancy. Besides being an “older mother” since I turned 35 last December, I’m a perfect candidate for carrying twins again.

Still, this generally doesn’t happen. Its supposed to be a 25% chance of twins every time they transfer two good quality embryos. To calculate the chance of four sets of twins, it’d be (0.25*0.25*0.25*0.25) = 0.0039, or 0.39%. Not exactly what we expected when we committed to using all the embryos after our first set of twins were born. However, we are still committed (or should be committed… whatever).

I’m technically 7 weeks, 5 days today, but that’s closer to 8 weeks than 7 weeks. So far it’s been my typical healthy pregnancy, complete with morning (read: all day) sickness and mind-numbing fatigue. In some ways I’m glad that this is “twins again” instead of “twins for the first time.” It’s easier to diagnose and handle many pregnancy side effects. For example, I can more easily identify when nausea is morning sickness versus acid reflux. I’m still not great at it, but it’s better than the first time. I have Zofran/ondansetron, Zantac/ranitidine, and Pepcid/famotidine in the cupboard if I need them.

Eating is easier than drinking. I can drink ice cold fruity tea. That’s about it. It’s the only thing I’ve found that doesn’t upset my stomach. Flavored seltzer water worked until about a week ago when it started giving me acid reflux. For food, my best options so far include

My multivitamin should help make up for my unvaried diet, right?

I noticed this time that if I’m upright for too long, I can’t stop yawning. As soon as I lay down, I stop yawning. I think my body is having a hard time getting oxygen everywhere and it’s telling me it needs a break. Maybe I’m not resting enough or maybe I’m dehydrated and my circulation isn’t as good as it should be. Or both. Probably both given my six small children and difficulty with drinking.

I expect this all to last until about 14 weeks.

An even more Bustling Home

Since we’re moving on from the unfortunate accident that erased all my content last December, would you like to see anything specific here?

Since we’re now having twins again, I can’t tell you about the difference between a singleton and twin pregnancy, but I can tell you how a (very) experienced twin mom handles twins. We can also talk about homeschooling, our multi-year plan to settle into our country home, or health and fitness. Or suggest something else that’s on your mind.