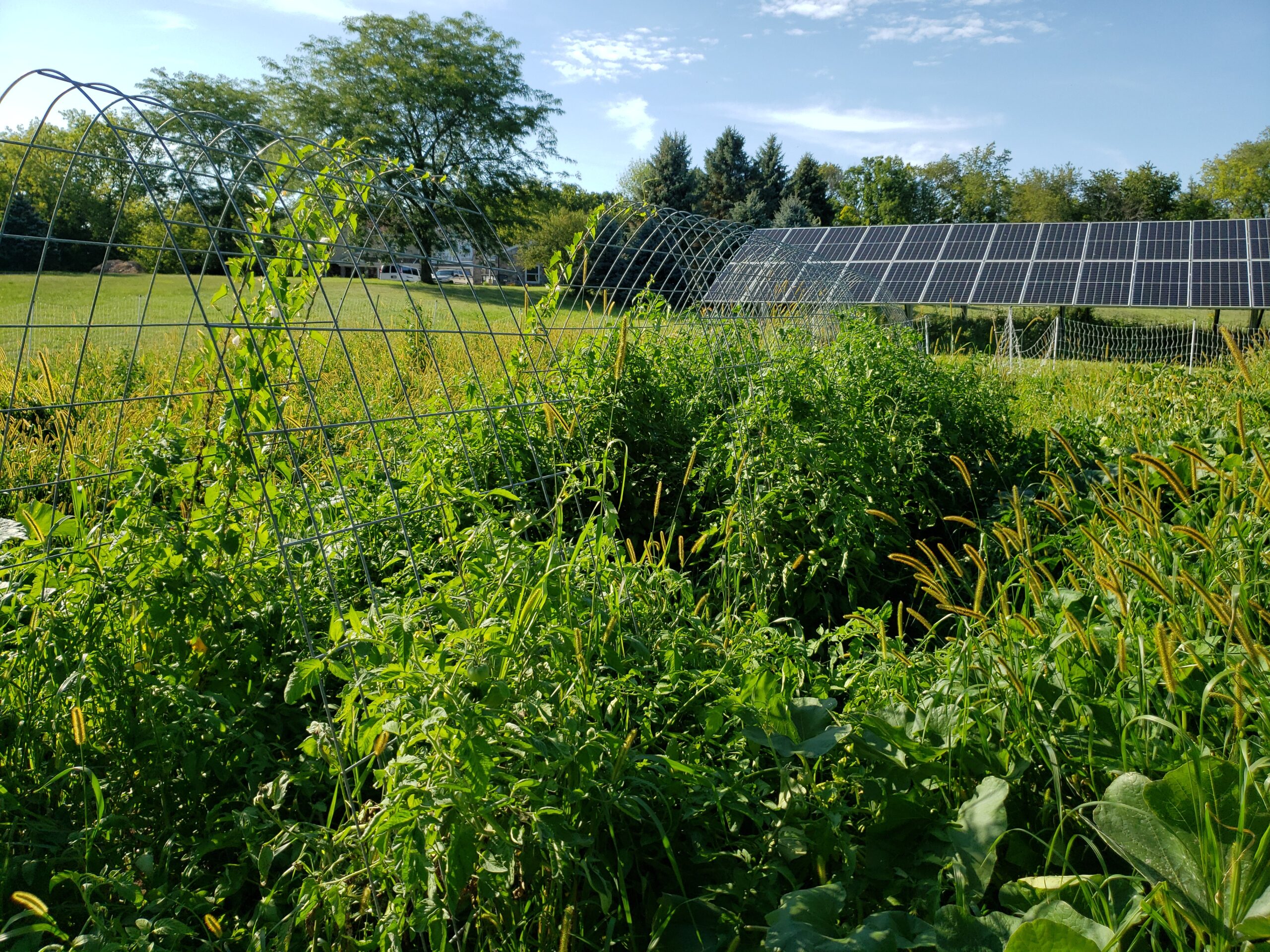 Jeff and I bought our current house on 10+ acres intending to start a homestead, including homestead gardens of various sorts. The newest addition this year was a veggie garden. Only one problem…

I have a brown thumb. I tried growing herbs in my apartment in undergrad and half of them died. That ticked me off, so I stopped watering the other half and they died too. I’ve even killed cactuses. Why on Earth would I want to start a garden?

I like food, especially good food, and I want to have good food to feed my family. That’s it. Incidentally, food is one of the primary reasons I like to work out hard too. It means I can eat more yummy food. Who’s with me?

Lucky for me, Jeff can grow things. (He can cook them pretty well too, but that’s besides the point for the garden. Just one of the many perks of being married to him!) I’m relying on that heavily. If it were up to me, our garden would probably all die like my attempt at an herb garden.

Why start a homestead garden suddenly?

This spring’s inspiration was Jamerrill Stewart. She’s well known among large families. She has eight kids, seven of them still at home, from toddler through almost adult. Her family recently moved to a new house on several acres. Not quite on a whim (I think), she put in a 75′ x 45′ garden. That seemed like a really good idea and we’d planned to start a large homestead garden at some point anyhow. It will be our third summer in this house. About time, right?

We found a local farmer to plow about a quarter of an acre just to break up the soil a bit. He used to farm this last a couple of decades ago, so he was helped us choose the best site. The soil was really compacted from years of disuse and void of all nutrition as far as we could tell from years of farming, so the site was nowhere near ready for planting when he was done. We still needed to plow or till it and add fertilizer.

We had seeds left from our feeble gardening attempt two years ago. In 2018, all of our plants fried in the little covered trays and some got trampled by puppies. For this year, we bought more seeds, potatoes, and onions. Good thing, too, because a bunch of the old seeds didn’t germinate. I downloaded a guide to starting seeds for various types of plants in Wisconsin. I started some seeds in late March, according to the guide: tomatoes, peppers, cabbage, Brussels sprouts, leeks, and kohlrabi.

It turns out that I suck at starting seeds. We have gotten almost no produce from the plants I started early. Oh well, that’s why this year is an experiment.

How much to we invest this year?

Since this is our first year, we could invest heavily and really commit to gardening or we could test a few things in a small patch of dirt that the farmer tilled up and plant a cover crop across the rest to prep it for next year. Each has specific implications, so let’s look a little closer at the options and the factors we considered.

Option 1 is we jump in full force and hope and pray we can keep up. It would be consistent with prior decisions since failure just means that the garden doesn’t quite work. We might have a bunch of weeds to kill before next year. It certainly would’t be catastrophic, but installing a large garden would mean a lot of preparation.

We’d have to have a large area plowed, probably by a local farmer since we don’t know if this field has ever been plowed. It might have some very large rocks in it. Then we’d have to trench and run power out to the garden to run an electric fence and install the electric fence. If we’re going run power anyhow and have a bunch of garden and orchard work, Jeff wants to put up a large shed or barn with electricity and water, at least for a hose hookup. See how a simple garden turns into a much bigger project?

It’s all scope creep, you might think. Not quite. We planned to do all of this eventually, but not all this year. The electric fence would save the garden from certain destruction by deer, rabbits, and all manner of critters. That is strictly necessary, thus electricity is necessary. The rest would make everything much easier but is not essential.

Once the growing season comes to an end, we’d have an insane amount of processing to do to not waste a bunch of food. I’ve never canned or mass processed food in any way. Jeff has, so that helps.

Somehow all of this turns into a steep learning curve for me even though I’m a little more likely to have the time to do it. Slight mismatch there. Oh well. No time like the present?

We’d still need an electric fence. Instead of employing a farmer, Jeff could till up a smaller area with our rototiller. It would be more manageable and we could see how well we keep up a garden and what pests we’d have to face before we invest more time and money into a larger garden.

However, the yield would only supplement our grocery store purchases and we’d have to expand in the future if we want to keep up with our kids’ inevitably growing appetites.

I’d still have a lot to learn, but maybe I’d have a little more time to learn since I’d have less quantity to deal with. On the other hand, I might get better at all this faster if I have more practice. Hmmm…

Which homestead garden did we choose?

In keeping with everything else we’ve done, we chose option 1 for our first homestead garden. It has given us lots of latitude in our experiments and lots of opportunities for success and failure, all in the same space. Also, if I have to tend a garden, it might as well be a heck of a garden.

We grew peppers, of course, though the plants haven’t produced much. Tomatoes are a favorite since we can make a bunch of stuff with them. We planted lettuce (fail), Swiss chard, beets (fail), turnips, rutabagas, cucumbers, green beans (fail), carrots (fail), pumpkins, squashes, zucchini, cantaloupe (fail), beans, corn (fail), and a host of brassicas (all fail). It was truly a heck of a garden. Check YouTube for a homestead garden tour as of August 2020.

However, our best crops were weeds. The entire 3700 square feet was overtaken with weeds. After I gave myself tendinitis in my wrist using a hand scythe I gave up trying to control the weeds.

Despite that, we’ve had a good harvest out of our homestead garden. I have no sense of scale, so I massively over-planted some things. For example, my winter squashes died early because of powdery mildew (possibly related to my over planting) and we still got at least two to three dozen of each kind of winter squash.

Coming up this fall, Jeff and I will do a post-mortem analysis of what worked and what we need to do differently next year. It’s going to be a long list. Stay tuned to learn from our mistakes.

Did you keep a garden this year? How did it go?